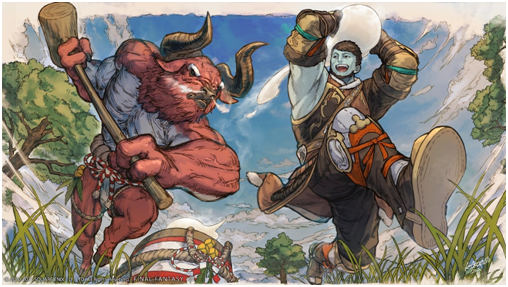 Note: You will be unable to complete the quest after seasonal event ended.

This quest is available for a limited time only.

" Heavensturn is a celebration that marks the passing of the twelve moons in the night sky, and with them, the vigil of each of the Twelve over the realm. It is on this sacred day that one among the gods wins celestial favor, and whose aspect thus exerts the greatest influence over the fate of Eorzea throughout the coming year. Clergymen, soothsayers, shamans, and others versed in such matters foretell that with this turning, the time of Halone, the Fury, will come.

Yet despite this annual significance, a strange and powerful gift, newly come to Eorzea from a faraway land, has begun to divert the attention and admiration of people across the realm, both smallfolk and adventurer alike. Said to be a principle element in the celebration of Heavensturn in the Far East, it is a mighty helm masterfully spellforged in the likeness of a rabbit. Adorable to some, atrocious to others, and appealing to adventurers for its attractive attributes, this rare, leporine headpiece may prove attainable by those with festive proclivities."

Like most seasonal event, they're not difficult or take so much time. You can just start this event by going to Limsa Lominsa's Upper Decks and find npc called UshiBugyo at (x:11.5, Y:13.8) 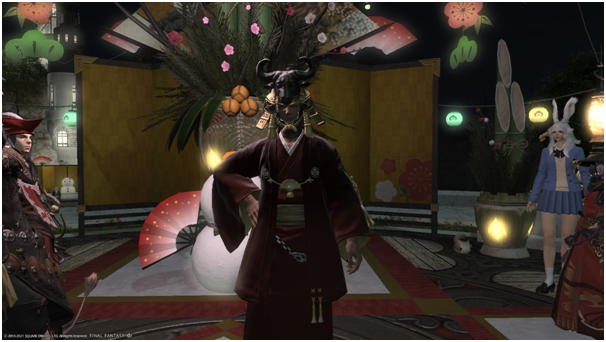 This is NPC Ushi Bugyo that will give you chain quest, there are 2 quest in it  starting with quest "Steering Clear of Trouble” with 2 cosmetics option reward. 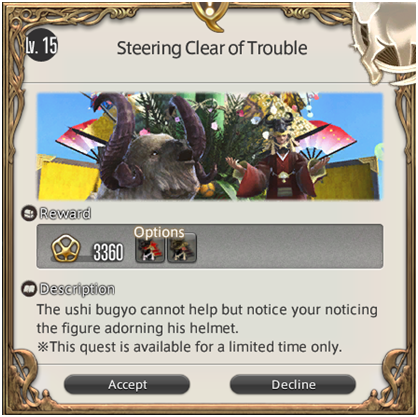 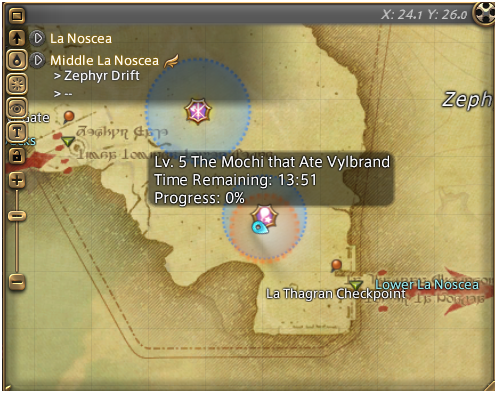 This quest is pretty simple, you just need to complete FATE "The Mochi that ate Vylbrand" located at Middle La Noscea Zephyr Drift just go there and you will see a bunch of people doing that FATE or if there is no FATE going on you can just wait for few minute and the FATE will spawn there. 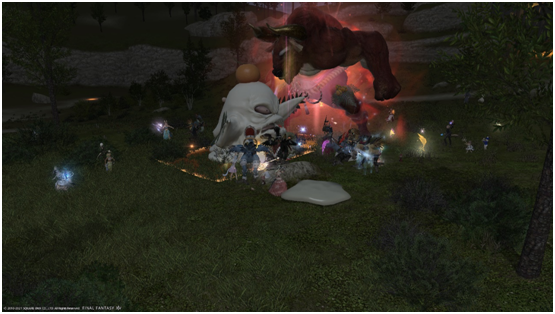 After you finish the FATE you just need to teleport back to Limsa Lominsa's go to Upper decks and talk to Ushi Bugyo again to complete the quest then receive the reward, the main rewards for the quest are the Black Ushi Kabuto and Crimson Ushi Kabuto you only can pick 1 between those 2 cosmetic. You will also receive an Achievement "Happy Moo Year"from completing the quest. 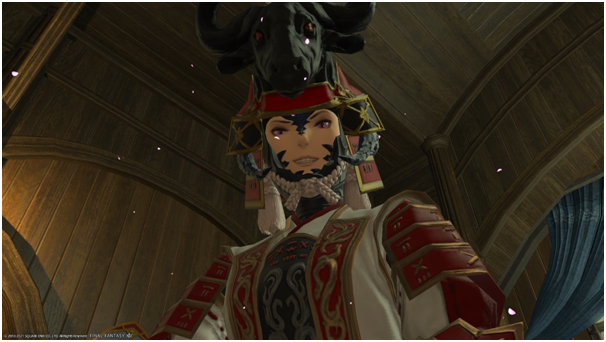 I pick the Crimson Ushi Kabuto because it fit with my Red Armor so i look like daimyo. The second and the last quest from Ushi Bugyo is "Bully for Mochi", this is more simple from the previous one, you only need to go to 4 places talk to NPC and go back to Ushi Bugyo to receive the reward, the main reward of this quest is 10 usable firework that you can use Magicked Prism (Advent Cakes)

After you complete all quest you will receive 10 Heavensturn Ticket that can be use to exchange with other event reward, 1 of the good reward is a tabletop decoration that can be use for In-Game house decoration Handmade Akabeko. 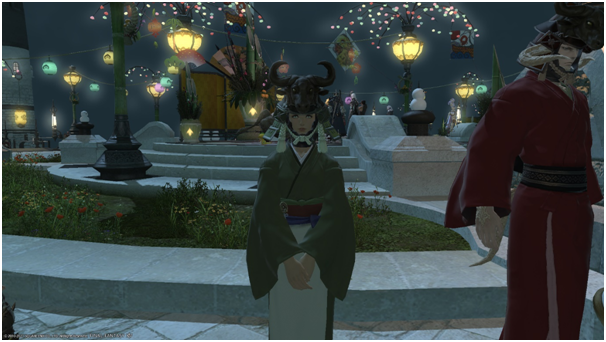 There is Ushi Shonin (Far Eastern Vendor) NPC near Ushi Bugyo, talk to that NPC to exchange your Heavensturn Ticket into event reward.

Item that worth to exchange in my opinion are: Handmade Akabeko, Crimson Ushi Kabuto and Black Ushi Kabuto.

What do you think of the Heavensturn event? What is your goal for this year in your life or ingame?