World Of Warcraft Shadowlands: How to get to 220+ iLVL PVP Gear?

World Of Warcraft WoW Shadowlands get to 220+ iLVL PVP Gear PVP Gear
It's no secret the gear is an integral part of all forms of PVP especially now with the removal of all scaling as a result, PVP players often have a lot of questions like "What's the fastest way to gear up" "How do I get the best gear for PVP." And a lot of questions regarding the new Conquest system and gear upgrades. In general, well our goal with this article is to break down this new gearing system, simplify it and give you all the information you need to have not only the best gear available but also the fastest and most optimal ways in achieving it. 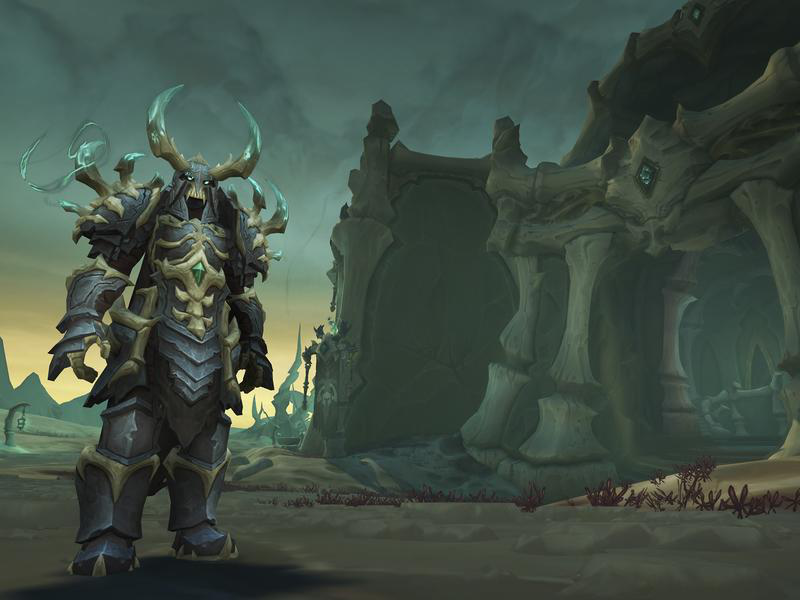 You'll be glad to know gearing from solely PVP activities has been greatly improved upon and will eventually provide a great alternative to PVE. However, certain advantages can still be gained by venturing into PVE. In this article, we will run through 4 steps.

So step one, you've just dinged 60 and want to jump into PVP as fast as possible, how do you do it? Well, there are two possible routes.

First of all is giving yourself a little head start, which can be done by purchasing gear from the auction house. Now I know what you're thinking, and no, I don't mean to go and buy 190 BOES for ridiculous amounts of gold, What I mean by this step is that on the Auction house, there are ilevel 151 BOE items, most of which are only a few hundred golds each purchasing these is optional.

Still, we recommend it as straight after leveling; you'll hit that 151, ilevel, which is a great spot to be. If you don't care about a head start or lack the small amount of gold and want to jump into PVP as soon as possible, you can skip this step altogether and jump straight into farming Honor, which is our step number two.

So whether you're 151 ilevel or still fresh in your questing greens, you can jump straight into the Honor farm, which is the bulk of the gearing process. The best and fastest way right now is to play BGs with the fastest Honor in doing random BGs, preferably inside a pre-made. Just some tips if you're on the horde side.

Cues are generally a lot longer, and you can talk to Sargent Wilson to enter mercenary mode allowing you to queue as if you were alliance, reducing your queue time quite a bit. There is a quest you can pick up at the Honor vendor called 'Observing battle,' giving you a little extra Honor. The reason for doing battlegrounds is the purchasable Honor gear. Purchasable Honor starts at ilevel 158 and can be upgraded several times capped behind Renown.

If you're reading this article before the season has started, the highest ilevel you can get that gear to right now is 171 due to the Renown requirement to upgrade a PVP item.

You can talk to the facilitator of conflicts next to the Honor vendor in Oribos, and each upgrade costs a predetermined amount of Honor. Alternatively, you can achieve the same gear from Dungeons. As this is a PVP guide, you're probably not going down this route.

Still, it's worth knowing that normal Dungeons reward 158 gear and Heroics reward 171, giving you equal gear to that of fully upgraded Honor gear for the first few weeks, but honestly, We recommend skipping Heroic and normal Dungeons altogether.

It's also worth knowing that you can kill one of the four world bosses once a week, which rewards 207 ilevel gear. There is no gear requirement to do so as you can easily find a group inside the Group Finder. There is the 'Wrath of the Jailer' event inside the Maw that you can clear once a week for a chance at ilevel 183 loot. Moving on to step number three.

This step is something that you can work toward instantly and complete at any time as you can look to do this at any point after you hit level 60 if you've got friends to play with, as it can be completed easily with around 150 ilevel. Otherwise, most groups are looking for at least 165 ilevel, which you can get from step number two. Step number three is doing Mythic Zeros.

There are eight Mythic zero Dungeons of which each boss has a chance at dropping you 184 ilevel gear. As with any PVE step in this guide, it needs to be stressed that this is optional. It will give you gear faster, but if you want to sit in battlegrounds, then no problem. This is because if you've got a full set of ilevel 171 gear, you can now upgrade most of your pieces to ilevel 184 if you've saved up 15k Honor on the day the season begins. You can jump into rated PVP with equal gear to anybody who's done Mythic Zeros.  For the try-hards out there, if you want the best gear ready for the season start and in the fastest way possible, we recommend completing Mythic Zeros and then filling the gaps with Honor gear.

It's worth noting that you'll want to make sure that you have a medallion and emblem ready to go if you've gone with a more PVE focused gearing route.

If you only want to play PVP; then you can stick to that. If you're reading this and it's at least several weeks into the expansion with a Renowned level of 22 and above, you can upgrade your Honor gear to rank 7, which ends up at 194 ilevel, Which is just a little bit lower than that of a Heroic Raider. 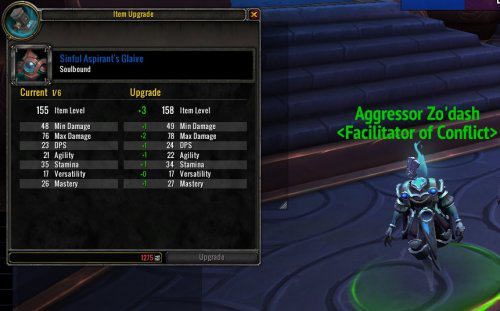 Using the Honor that you've earned from either battlegrounds or Arena, whichever your poison is. Then with the release of the Arena season in December, we'll be able to gain Conquest, which is, of course, used to purchase Conquest gear. You will get a set Conquest cap each week, and you can then use this Conquest to buy unrated gear.

Unrated gear begins at 200 ilevel, and to upgrade this gear, you need to reach certain rating thresholds: Challenger, Rival, Duelist, Elite. To upgrade your Conquest gear, it once again costs Honor, so I mean it when I say that you really can't have enough Honor in this expansion.

With the speculation going from previous seasons, we can assume the Conquest gear's ilevel will look something like this.

That's it in terms of PVP gearing, purchase new Conquest pieces every week, upgrade them as your rating goes up, and you don't ever have to enter PVE if you don't want to.

Once again, if you're a try-hard and want to truly optimize your gearing progression in the fastest way possible you can still gain an edge from venturing into PVE. This is because you'll be limited on how many Conquest items you can buy per week doing PVP solely. You can complete the Heroic and normal Castle Nathria raid with the latter rewarding ilevel 200 gear equal to that of an unrated Conquest piece and Heroic rewarding 213 equal to what we predict of Rival. 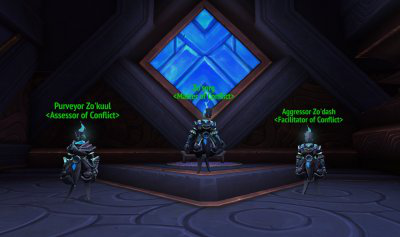 Mythic plus will provide a means to get some gear although much weaker than previous expansions, you can still get up to ilevel 210 gear from Mythic 15.

But it's slower than that of Heroic Nathria. If you're able to venture into Mythic raiding with a guild or even pugging the first few bosses, this can be a great way to get some 226 ilevel pieces fast.

It's worth noting the final two bosses dropped the highest ilevel pieces in the game at 233, so eventually, if you can get your hands on these, then they will be an upgrade due to the pure main stats.

I really can't stress enough that this isn't something that's going to make or break your rating goals. We're just providing you with the information to get the best possible gear available in the fastest manner. If you want to stick to purely PVP, you'll eventually be on an equal footing gear-wise with players doing a mixture of PVE and PVP, although they will have a small advantage early on.

That's the majority of the gearing system covered, but there are a few new methods introduced with Shadowlands that I want to cover quickly. You may be forced to obtain legendary patterns chosen for your class by doing Dungeons or raids and the same goes for conduits.

Although there are indeed a select few from the Conquest vendor. Certain conduits do come from either the raid or Dungeons once again, and last but not least, and one of the most important systems to improve your gear is going to be the Great Vault. 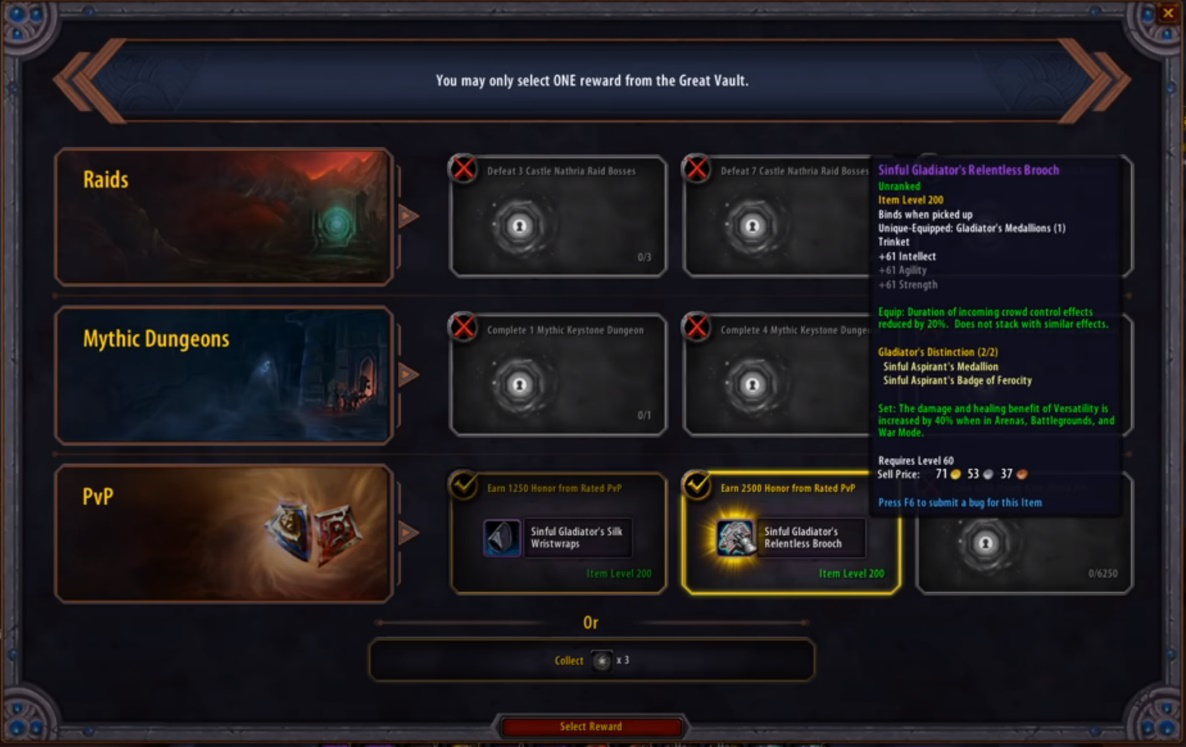 A Great Vault is similar to that of the Mythic plus or PVP weekly caches in BFA, but this is an improved version. You can have a selection of up to nine pieces of gear to choose from, which you can unlock by either defeating either Castle Nathria bosses, which reward items based on the raid difficulty, Mythic Dungeons reward items based on the Dungeon difficulty completed and PVP gear, which again skills with your highest rated bracket for that week, and you can take advantage  of the system however you choose, be it doing the minimum of earning 1.2k Honor and getting one item earning 6250 and having three options or even mixing PVE and PVP to give yourself even more variety. If you aim to maximize your gear early on, you should look to either push your rating in PVP, complete a high Mythic Dungeon or kill three bosses on either Heroic or Mythic difficulty.

Just as a quick disclaimer

Although there is a lot of PVE involved in this guide, eventually, the best in slot gear will be, for the most part, solely from PVP. If you are not the few pushing for the maximum gear as quickly as you can to gain the upper hand, it doesn't matter. You can stick to PVP, play what you enjoy, and gear up gradually, but for now, we hope this helped.