Here is some information about the Final Fantasy XIV Eternal Bond System, so called wedding. And I also give some opinions for it.

Standard plan is free, and the Gold plan and Platinum plan should pay for play. Obviously, you could get a special ceremony chocobo and special gifts if you pay for that. Moreover, players also could choose the special weeding dress and suit, special decoration for the church and etc. You can buy cheap FFXIV Gil and then buy gorgeous suits and dress for your wedding ceremony!

I searched some information about the players attitude to FFXIV wedding ceremony. There was a typical players who talked a lot. The authority did not say anything about sharing houses between the two players who apply this ceremony. So many players do not want to pay anything for this “boring” weeding. For the other players who are invited to attending the ceremony, they should spend several hours taking part in a in-game wedding. Not many people really want to spend their time on that.

However, I think there are many side benefits for in-game weeding indeed. This is a totally perfect way to bond two players together in virtual space. It could help players to gather the real experience in FINAL FANTASY XIV, also could make the character more vivid. As a part of a role playing game, it makes the game integrated. 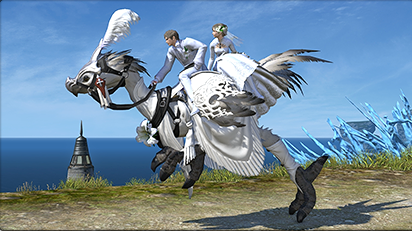 There are a lot of debatable issues for this ceremony. It is impossible to satisfy every player. Actually, the price and the service are fair for all players, isn’t it? There is always a choice for you to complete this ceremony. More importantly, the officials set no limit on the couple gender. That is to say even two females could hold this ceremony in game. Whatever others think about the bonding system, there are many couples are willing to apply this ceremony. So am I. Why not have a try? I believe after you experience once in it, it would benefit a lot of fun from it.