Sohr Khai Dungeon is obtained as part of 3.3 main scenario quest. It requires a minimum item level of 200 to enter and dropped item level 215 armor as well as Tomestones. This dungeon consists of sever trash polls and 3 bosses. To skip to a specific boss, please use the top left hand for the video. If you want to buy FXIV Gil, SSEGold has nine years of MMO game gold selling with instant delivery！ 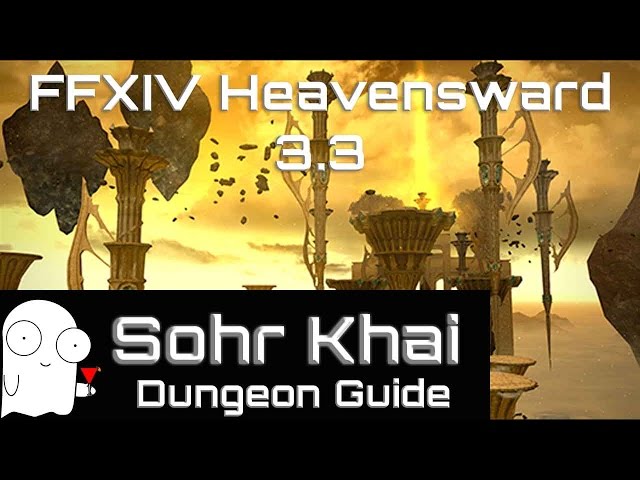 For the few poles of the dungeon, there is going to be mostly basic mobs things you are used to when it comes to the dungeons. However, there will also be enemies called enchanted fans. If you kill an enchanted fan, it will drop in a way. If you step in it, it will knock you away. It will also give you a hey stuff. So kill the enchanted fans first and use the Facebook to kill things faster. Do this for a few polls before you come to the first boss.

The first boss is chieftain Moglin. During the fight, Moglin will summon plenty of mughals to help him deal with you. The other named Captain Mogsun covers Mogolin. So you will need to kill him when he is alive in order to kill the boss. The rest of them just attack and do some AOE. So stack them up in a way them down. When Moglin starts channeling palm praie, he is going to summon an AOE under a number of the Dead mughals. What you need to do is to attack the dead Moogles corpses in order to knock them away from the AOEs. If they are not knocked out of the AOEs, they will resurrect at full health and also gain higher maximum health. He will continue to summon more and more Moogles and attempt to resurrect them. So just make sure you are on top of knocking them away and it is an easy fight. He also does some of flipping knocking staff that shoots in AOE possible durability stack in a cross-section through the arena. What I like to call the bomberman explosion. So make sure to just be away from it when it spawns.

After Moglin, you will come to a few trash packs nothing fancy here. But keep in mind that a fair number of these enemies cleave with their every auto attack. So ensure they are facing away from the group that some damage you don’t want to deal with. Kill a few more packs before facing the second boss.

The second boss is Poqhiraj. This boss has two fairly simple mechanics. For its quasar attack, make sure no one is between the boss and away to stand either directly behind or in front of the boss for this attack. If quasar hits a wall, it will destroy it and reveal electric looking water. Standing in this water puts a very strong DoT on a player. So you will want to avoid stepping in at all. Wen sakuar jumps into the air, it will crash down on one of the two ends of the arena, which you will want to stand far away from as well as break one or more of the walls. It will then dash through the arena knocking up anyone who is directly in its path and knocking anyone else to the sides. Now what you are going to want to do is to get knocked to the side. But make sure you are not knocked into the electric water. Sakuar also marks players with cloud call and has that attack. Someone a giant cloud. A AOE over the marked players head. Drop this away from the party and keep in mind that when it explodes, it will destroy nearby walls. It is not so bad as you saw we basically stood in the water a wheeze and did fine. But that is not the recommended way to do this fight.

Moving on, the final few trash polls consists of a few dragons. One of them cauterizes the froup to form an ice bath. After killing those, you are on to the final boss.

The final boss is Hraesvelgr. This arena consists of several platforms with wind currents to jump between them. The boss itself is undirectional, so don’t worry having a hard time pulling off positions here. Face values shoots, people with a holy being AOE which pulses repeatedly for moderate damage. Just move away from the pulsing area to get out of the damage. Shortly into the fight face vulgar. Felger will elect to destroy several platforms of the giant AOE. We don’t get hit by that AOE and don’t be standing on those platforms. Now, it i less platforms. It is going to severely limit your movement along the arena. The other mechanics that come now. With this done, he will then summon several Holy sprites that shoot people with magic attacks and you should kill these. He also shoot some ice cubes with his diamond storm attack which will float around the arena and exploded they get near any players doing moderate and inflicting heavy. They are not lethal but you don’t want to have to constantly deal with the damage that they do. So keep an eye on those orbs and jump away from them if they get too close to you. Just continue killing sprites and dodging AOEs, and you will be fine. It is not an overly difficult fight. This Filter will elect to destroy even more platforms at some point in the fight. But the strategy remains the same with way less room.