FFXIV Eureka Quests Guide
With the release of patch 4.25 in FFXIV, Square Enix has also introduced the Forbidden Land of Eureka Anemos. Players begin at elemental level 1 and can reach level 20. Any elemental levels earned will carry over to subsequent forays into Eureka. This is a brand new exploration area for players who are looking for new grindy content to dive into, so we’ve put together a few guide to help you out. 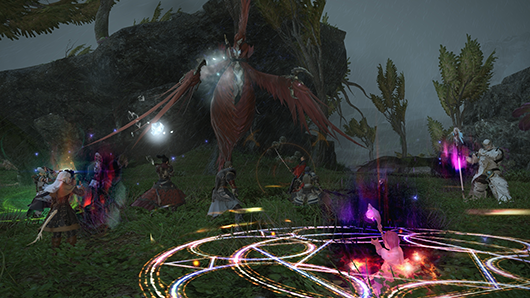 Eureka is a lot more fun with a full party in FFXIV, and it can also be more efficient for leveling up. But in the event that you don’t have a party with you, you can still level pretty quickly on your own. When solo, always kill enemies that are at your level to keep your kill chain going, and to get decent experience.

Once you hit level 6, if you happen to die, you’ll lose a chunk of your experience, but you won’t de-level. This changes once you hit level 11. You’ll have to be careful with the mobs that you’re pulling, or you might lose a lot of progress. However, you won’t lose any experience if you are Raised after getting KO’d in FFXIV.

You’ll spot two other Aetherytes on your map. However, you can’t attune to them until you hit level 9, so just focus on completing quests and leveling up till then.

In Eureka, once another player or party has claimed an enemy, don’t worry about killing it. The experience gained will be very little, so you’re better off hunting your own prey.

If you’re hunting NMs in Eureka, make sure to kill the regular enemies or the big boss won’t spawn. Specific mobs can be killed to spawn a particular NM. For instance, killing Cactuar mobs will spawn the Cactuar NM.

Whenever you’re exploring the map, look out for a Fairy that spawns occasionally to get a buff. You can either get a damage buff that makes you a little more powerful, or a healing buff that allows you to survive longer. This is especially useful for solo players.

FFXIV Eureka Quests Rewards
Eureka Weapons and Gear
When defeating enemies, players will occasionally obtain protean crystals, which can be used to enhance Eureka gear by speaking with Gerolt in Eureka (X:17.9 Y:32.2).

Specific items are required to enhance Eureka gear.
The quantity and frequency with which protean crystals can be obtained will increase with the elemental level of enemies, the greatest yields coming from those at level 20 or above.
Pre: FIFA 18 TOTW 28 Predictions: 91 Bale, 87 Quaresma, 89 Vidal, 87 Miranda and 87 Arnautovic Next: FIFA 18 TOTW 27 Predictions: 97 Ronaldo, 91 Salah, 89 Icardi, 88 Nainggolan and 85 Keita